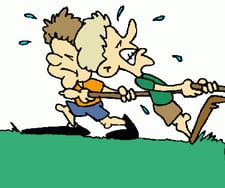 On April 28, 2017, CMS published the FFY 2018 IPPS Proposed Rule in the Federal Register.  Go HERE for our summary of the Medicare DSH/Uncompensated care payment portion of the rule.  After years of discussion to use Worksheet S-10 uncompensated care data to distribute the Medicare DSH/UC pool always ending with CMS “kicking the can down the road”, it appears that CMS has finally dug their heels in.  Who else just had a moment of deja vu?

Last year, as part of the 2017 IPPS Proposed rule, CMS proposed to begin using uncompensated care costs per worksheet S-10 beginning in 2018. However, as you know, in the final rule, CMS did not finalize the use of Worksheet S-10 to distribute the uncompensated care pool.  Not much changed in the one-year since then, however, CMS has again proposed to begin incorporating UC costs from worksheet S-10 for the distribution of the UC pool beginning in federal fiscal year 2018.  This time though, we think they are going to stick to it.

First, let’s go through a quick recap...If you remember last year, we told you that:

Again, in the end, CMS reversed course and laid out a “plan” to migrate to the use of worksheet S-10 over a period of time after some changes and reforms were made to the instructions, the audit approach, etc. CMS agreed with provider concerns that:

Since the FY 2017 final rule was released:

The language in the FY 2018 proposed rule takes on a different tone than in the FY 2017 proposed rule and that is why we believe that CMS will finalize using Worksheet S-10 in the Factor 3 calculations to distribute the uncompensated care pool.  Throughout the FY 2018 proposed rule, CMS is trying to tell a story that leads to their ultimate desired conclusion to begin using Worksheet S-10 in Factor 3 calculations.  Here are some excerpts that lay the groundwork to make their case:

And then finally, “we have reached a tipping point with respect to the use of S-10 data. Specifically, we can no longer conclude that alternate data are available…..that are a better proxy for costs of subsection (d) hospitals for treating individuals who are uninsured than the data on uncompensated care costs reported on worksheet S-10”

Only time will tell what CMS ultimately decides to do with regards to finalizing the use Worksheet S-10 to determine a qualifying hospital's uncompensated care payment.   We’ll leave it up to you to decide if the plan will stick this time – but for what it is worth, based on the language used in the proposed rule as detailed above, we believe that the change will be made this time and that providers should prepare themselves as best they can to deal with this significant change.  This is not a drill.