On April 28, 2017, CMS published the FFY 2018 IPPS Proposed Rule in the Federal Register.  After years of discussion on Worksheet S-10 and false starts on the use of uncompensated care data for Medicare DSH/UC pool distribution purposes, CMS appears to have finally moved forward with implementation.  Go HERE for our summary of the Medicare DSH/Uncompensated care payment portion of the proposed rule.  In this post, we will take a dive into Factor 2 as described in the proposed rule.  For a quick refresher on Factor 2, go HERE.

Factor 2 reduces the Uncompensated Care Pool (Factor 1) by the change in the national uninsured rate.  For FY 2014 through FY 2017, Factor 2 equaled 1 minus the percentage change in individuals under 65 years old that were uninsured. The change in the number of uninsured was between the payment year and 2013, which was the last year before the ACA became effective. The data source for this information, until now, was the Congressional Budget Office (CBO) reports.

Section 1886 (r)(2)(B)(ii) of the Act permits the use of a data source other than the CBO estimates to determine the percentage change in the rate of uninsured beginning in FY 2018.  In conducting analysis of potential alternate data sources, CMS considered the following:

With these factors considered, CMS determined that the best source of data that meets all of these criteria is the uninsured estimates produced by CMS’ Office of the Actuary (OACT) as part of the development of the National Health Expenditures Accounts (NHEA).  CMS indicates that the NHEA represents the government’s official estimates of economic spending within the health sector.  Of note beginning with FFY 2018, CMS will transition to “a resident based population estimate” instead of just “legal residents”.  While CMS provides additional detail on NHEA data and studies, for the sake of exhaustive detail, we will not address this here.  However, as you can see from the graphic below (click to enlarge), the “tree” of data sources and agencies that feed into the NHEA is somewhat complicated.  We suggest that you read this portion of the rule so that you can understand the interrelationship of those data points and relay any concerns that you may have in your comment letter. 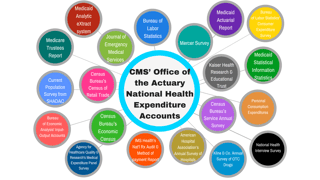 The calculation of the proposed Factor 2 for FY 2018 uses a weighted average of OACT’s projections for calendar years 2017 and 2018, as follows:

Percent of individuals without insurance for CY 2017: 8.3%

Percent of individuals without insurance for CY 2018: 8.1%

Percent of individuals without insurance (weighted) for FY 2018:

Percent of individuals without insurance for CY 2013: 14%

Don't miss the subsequent blog posts in our FY 2018 IPPS Proposed Rule series and SUBSCRIBE TO OUR BLOG BELOW!